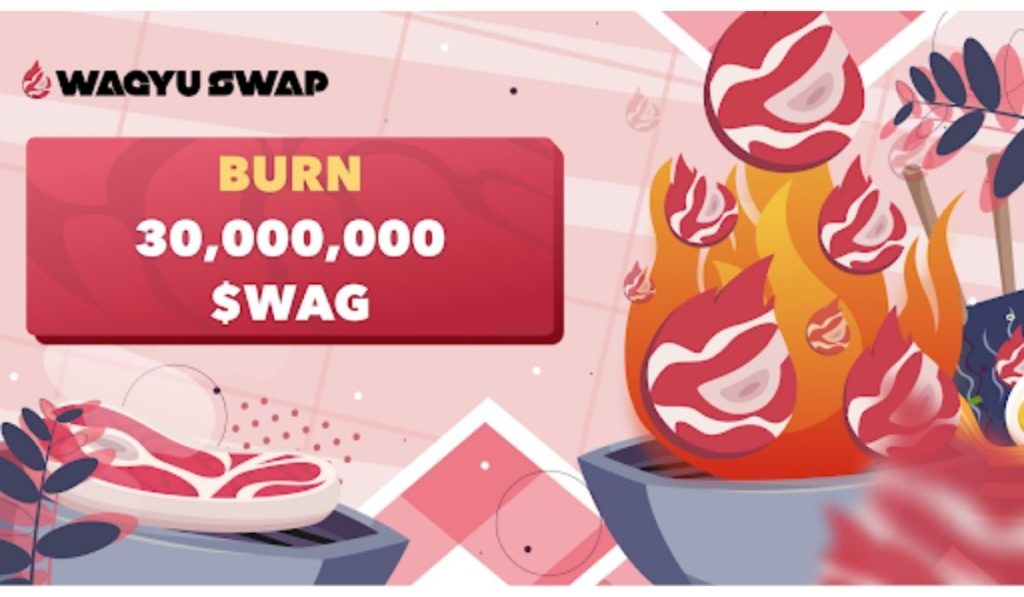 The decentralized exchange Wagyuswap announced today 9 December 2021 that it has burnt 30 million of its native token, $WAG. This takes off 7% of the total circulating supply of the token, bringing the circulating supply to 500 million. A staff of the company, Chef Ramsey announced the burn shortly before the commencement of an AMA by Velas COO, Shirly Valge.

WagyuSwap has a burn mechanism set up to offset the smart contract’s minting. This reduces inflation by removing existing tokens from circulation which eventually increases the value of each token. The DEX burned 2 million of the tokens earlier in November and will continue to burn strategically.

WagyuSwap recently announced the “Great Steak” event which allows holders of $WAG token to stake and get rewarded with more tokens. According to Chef Ramsey, the program is going well with stakers seeing good returns.

“The WagyuSwap community members who are staking are still seeing crazy returns with some of the pools returning over 800%.”  “We plan to roll out even more steaking initiatives in the nearest future,” he added.

Stakers don’t just earn more $WAG tokens but also get rewarded in many other tokens such as $SCAR, Valhalla’s Metaverse token, and $ASTRO. Ramsey further said the company will be rolling out other new features to reward loyal $WAG holders.

“We will continue to innovate in the DeFi space, by rolling out new features, steaking and farming pools, as well community-based events and competitions, partnerships with various high potential projects, and of course the continuous burning of $WAG,” he said.

With the continuous burning and a potential appreciation in the value of the tokens, WagyuSwap hopes to become a leading DEX and also have a token that will be leading in the crypto market.