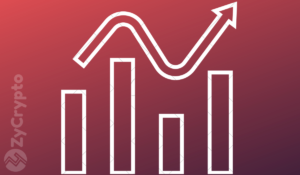 There might be some good news on the Bitcoin horizon in the very near prospect as the asset gears up for next year’s halving in a few months’ time. While the market still patiently awaits a bull run, a new analysis from popular analyst PlanB, has shown that Bitcoin could begin its next bull run, as soon as next week.

Popularly known for the Stock To Flow (S2F) ratio considered as one of the most accurate models for Bitcoin forecasts ever seen, Plan B took to his Twitter to show a chart with details of Bitcoin’s adjustment levels over the last 7 years.

These adjustments usually happen every other week and are done to make sure that there is a new block mined on the chain, every 10 minutes. PlanB’s chart showed decreases and increases as blue and red dots respectively. According to the chart, the price of Bitcoin seemed to jump up a bit, whenever a decrease in difficulty is immediately followed by an increase.

Based on the estimate, the next difficulty adjustment is expected on Thursday 21 Nov and if PlanB is right, the Bitcoin market should witness a +4% jump, especially as there was a blue dot last week signifying a reduction in difficulty.

Has This Been Consistent?

Maybe not. Someone pointed out to PlanB that previous bubbles including the one back in 2017 which sent Bitcoin to its all-time high, did not follow this method precisely.

Rejecting the notion that there was a capitulation in 2017, PlanB opined that any incidences that seem to show a capitulation and doesn’t follow the aforementioned pattern were in fact not capitulations, but were small irregularities in the bull run at the time, which can easily be explained by sudden surges in the Bitcoin hashrate.

Shortly after, PlanB retweeted another user’s tweet, which seemed to warn the community of the chance that “there is no immediate jump in price with the halving.”

It’s important to note, however, that Bitcoin’s difficulty has adjusted a bit since the first tweet and has now dropped all the way down to -0.8%, meaning that last week’s blue dot is not followed by a red one. All we can do now is to wait for next week.

The post Stock To Flow (S2F) Creator Predicts An Exponential Surge For Bitcoin By Next Week appeared first on ZyCrypto.