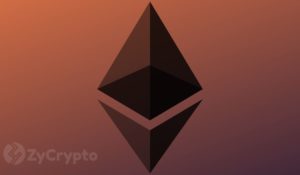 The price of ethereum today (November 12) is showing no significant movements as it hovers around $187. Nonetheless, ETH’s move higher has been much more notable when valued against the flagship crypto, bitcoin. The ETH/BTC pair has been surging, gaining as much as 7% over the last few days.

At press time, ETH has appreciated by 0.49 percent against the US dollar to trade at $187.57. This is a slight correction from the $190.34 high recorded yesterday as bitcoin also rallied to over $9,200 before experiencing a huge selling sentiment that caused a drop to the $8,700 zone.

Despite this present bearishness, there some catalysts that could boost the bulls in the near-term: one is the rising network usage. The Ethereum network has witnessed a palpable growth in the network activity, demonstrated by the rapid increase in gas usage.

In fact, the total daily gas used reached a new high in mid-September as noted by the founder of EthHub on Twitter. If history is anything to go buy, this is bullish because the last time ethereum’s network activity soared high, it pushed the price to as much as $1,400 during the peak of the crypto euphoria period in 2017.

ETH/BTC Heats up; ETH May Have Bottomed Against Bitcoin

Analytics firm, Skew, recently took to Twitter to ask the question that has been nagging most people in the crypto space – “has Ether bottomed relative to bitcoin?”

The ETH/BTC exchange rate has been rising since the start of this month indicating that ETH could be bottoming against bitcoin (BTC). Skew noted that the ETH/BTC pair gained at least 7% last week. Since late-October, ETH has surged by at least 2,422 satoshis to the present 21,400 satoshis. If it breaches the next resistance at 21,900 satoshis, further upside could be seen.

Does this signal a looming altseason?

As is the norm, every time ETH rises significantly against BTC, some crypto watchers are quick to predict an imminent altseason. This is also the case now as the ETH/BTC exchange rate exhibits strong momentum. Crypto analyst by the name CryptoWolf told his more than 18,000 Twitter followers that altseason has commenced, owing to the witnessed increase in the value of most alts against bitcoin. He goes ahead to list a couple of alts demonstrating this trend, insisting that investors should ensure their alts are not bucking the trend.

Ethereum Could Revisit $260 This Month

The Ethereum network might face a slew of technical barriers in the coming months as it transitions to the proof of stake model (Ethereum 2.0). However, in the near-term, in case you were wondering where this mounting bullishness could take the price of ETH, crypto analyst Josh Olszewicz eyes a potentially major upside for the largest altcoin.

In essence, ETH may experience an upswing that will take the price at least $74 higher. That could bring ETH’s price to around $260.

The post Why These Crypto Analysts Say Ethereum Is Primed For A Major Rally appeared first on ZyCrypto.