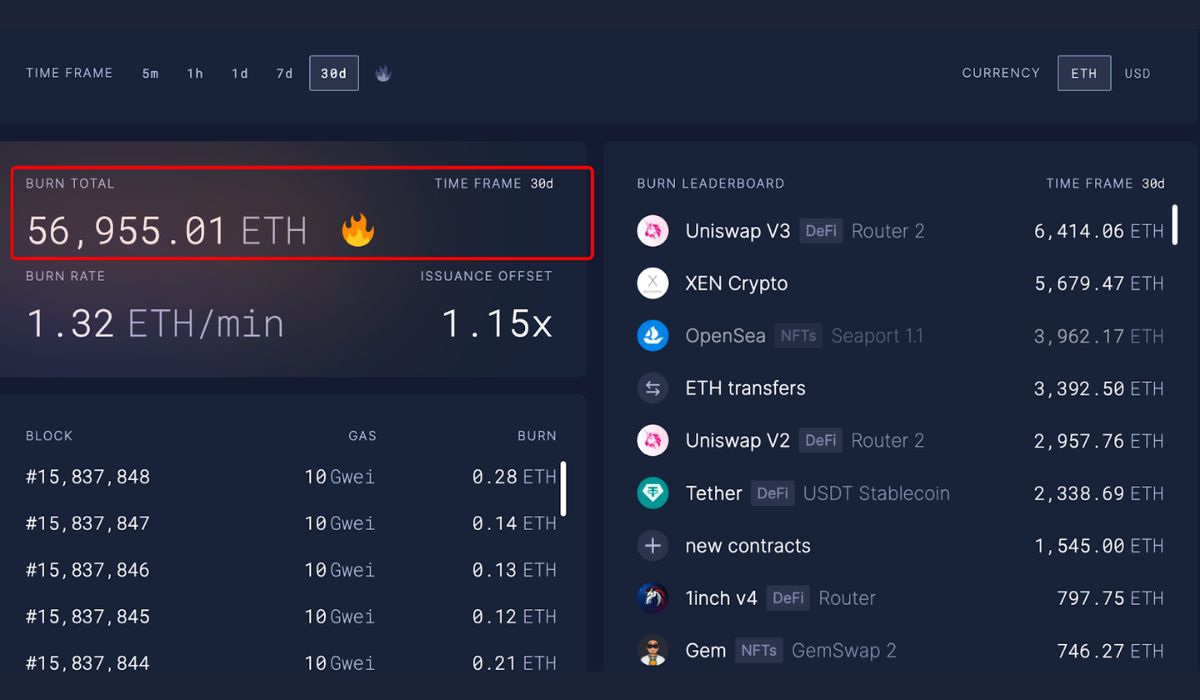 Ultrasound.money data shows that this month marks the first time total deflation has occurred in Ethereum in a calendar month. The total ETH supply has decreased by 56955.01 units, or about $88.98 million, over the past month. Ethereum entered deflation as its daily average, weekly average, and the monthly average of outstanding supply were all negative. Since the Ethereum merge was completed, the total gain has only been 1330.46 ETH after more than 40 days, or slightly more than 80% of the daily issuance of 1654.06 ETH.

After EIP-1559 became effective on August 5, 2021, every transfer on the Ethereum chain has destroyed or burned a certain amount of ETH. Available data from ultrasound.data shows that there were 2,066.29 ETH destroyed yesterday, surpassing the daily issuance of 1,654.06 ETH. If this ETH burning rate continues, ETH could potentially burn 768,000 pieces yearly, which is around 25% of the present annual increase of 615,000 pieces, with a current annual deflation rate of approximately 0.1%.

Data from Dune Analytics shows that, as of October 27, 2022, the cumulative destruction of ETH has surpassed 2,691,277.27 pieces, valued at roughly $4.2 billion. The EIP-1559 proposal that went live as part of the Ethereum London update has become more effective over an extended period.

This activity shows a relatively large amount of destruction benefits realized from the active application ecology on the Ethereum network. According to ultrasound.money data, the most Ethereum tokens burned are on the transfer process via the Ethereum blockchain, with around 245,625.09 ETH being taken out of circulation. Notably, the second is OpenSea, which has burned about 230,050.14 ETH, and the third is Uniswap V2, with a total of about 140,430.63 ETH removed from the overall supply. These platforms are followed by Tether, Uniswap V3, Otherdeed, Metamask, and many others.

It’s pretty easy to see from the ETH burns ranking that the hotspots of the Ethereum ecosystem in the last few months have primarily focused on crypto transactions, NFTs (or non-fungible tokens), DeFi (decentralized finance), and stablecoins.

Although the Ethereum ecosystem is maturing, the L2 ecosystem is also growing steadily. According to L2BEAT data, as of October 27, 2022, the aggregate hedging of Ethereum Layer 2 was about $5.09 billion.

Just a few days back, XEN Crypto (XEN), a widely-used multi-chain mining protocol on the entire network, had ranked first for ETH token burns for several days following its launch, with a total consumption of more than 4491.03 ETH tokens, accounting for around 26.9% of the 7-day total burn of Ethereum tokens.

With the launch of the L2 expansion plan and the fast-paced growth of TVL, it is set to bring new growth points to the Ethereum ecosystem. In the foreseeable future, many more applications may lead to community FOMO, which might help ETH accelerate its deflation rate.

As the Ethereum ecosystem continues to grow in prominence and as deflation is widely expected, market expectations are once again rising. According to The Block’s reporting, on October 28, Fidelity Digital Assets, a division of the massive financial services firm Fidelity Investments, will begin offering its institutional clients the ability to buy, sell, and trade ETH tokens. Also, this shows that large financial institutions are hopeful about Ethereum’s future.

After the ETH network underwent the Merge on September 15, 2022, the price of the secondary market has been declining. After 42 days of gradual consolidation, it regained its lost ground. According to MEXC market data, the ETH price was reported at around $1,561.66 on October 27, 2022, with a significant increase of around 25% after a week, and the price has now returned to its original levels.

With the enhancement of ETH deflation and the ongoing development of Layer 2, more consumers and traders see the future potential value of the Ethereum network and ecology and start to increasingly focus on Ethereum as an investment at the present stage. It will be interesting to see if ETH, the leading smart contract platform, can break the historical record in the upcoming bull market.