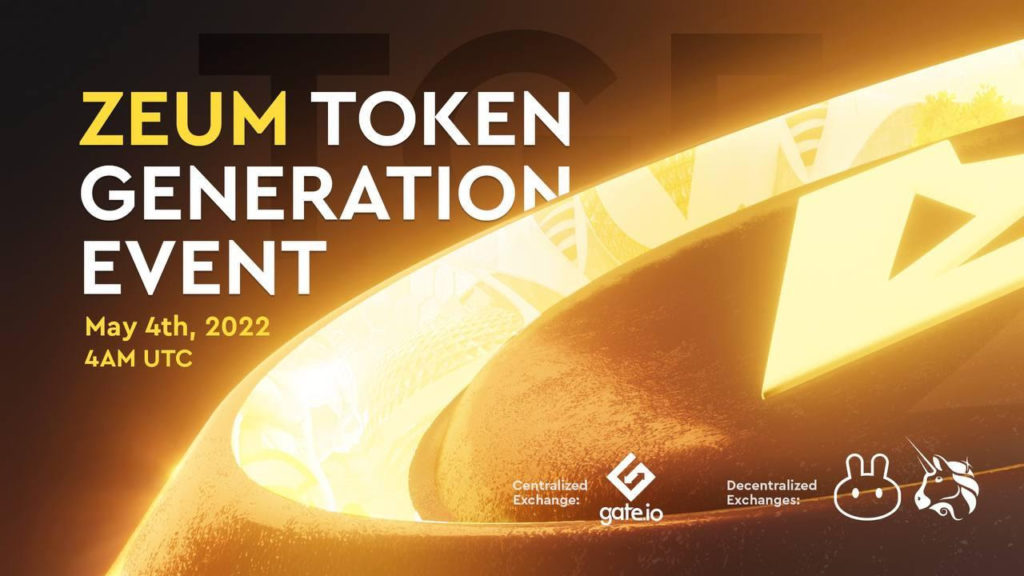 Colizeum is elated to announce the launch dates of its $ZEUM token generation event (TGE) scheduled for May 4th, 2022 at 4:00 am UTC.

The TGE will be held on both centralized and decentralized exchanges to ensure everyone has fair access to the token launch.  These exchanges will include Gate.io, Uniswap, and PancakeSwap. Following the TGE, token holders will be able to stake ZEUM on Vault. inc from day one. There is a staking pool of 1 million ZEUM tokens. The TGE comes after Colizeum completed its initial DEX offering through TrustPad, Gamestarter, MetaLaunch, and Infinite Launch.

All ZEUM stakers will be automatically enlisted for the surprise addition of ZEUM token airdrops, Colizeum partner-token airdrops, Colizeum, and its partner’s NFT drop whitelist spots, exclusive in-game quests and rewards from partner games, and higher-income fro playing games in the Colizeum game store. Note there will be two types of staking pools: a single-sided ERC-20 protocol and a BSC staking pool and liquidity pool.

Colizeum seeks to change the mobile gaming industry by providing a solution for all game developers that will allow them to integrate the best blockchain monetization methods into any game. Colizeum introduces its SDK, a frictionless shortcut for mobile game developers to swiftly and quickly implement tokenized game modes. The SDK also helps developers implement a play-to-earn economy without necessarily knowing blockchain development.

The platform has a unified economy allowing game developers to add blockchain monetization layers to traditional monetization such as purchases and in-app ads. Developers can also build blockchain-only games and metaverses.

So far five games have already been onboarded onto Colizeum’s game store. Dystopia: Content of Heroes was the first game to implement Colizeum’s SDK. Notably, the game received the Best Strategy Game of 2020 award by Huawei AppGallery. Poli Pong, previously featured on the App Store as a Best New Game and Editors’ choice also plans to implement the Cozeum SDK.

In addition to the increased demand within the gaming space, Colizeum recently welcomed Dota Legend, Wu Seng to its ranks to help strengthen its appeal in the gaming industry.

Notably, Colizeum has come a long way in its development phase. The first phase of the SDK, staking, and NFT minting is already complete. The bridge between the ERC-20 protocol and the BNB Smart Chain network has also been deployed on AnySwap. The platform will be releasing its beta of the full SDK in June 2022.  Currently, the platform is working on a new major partnership that will be announced in the coming days.