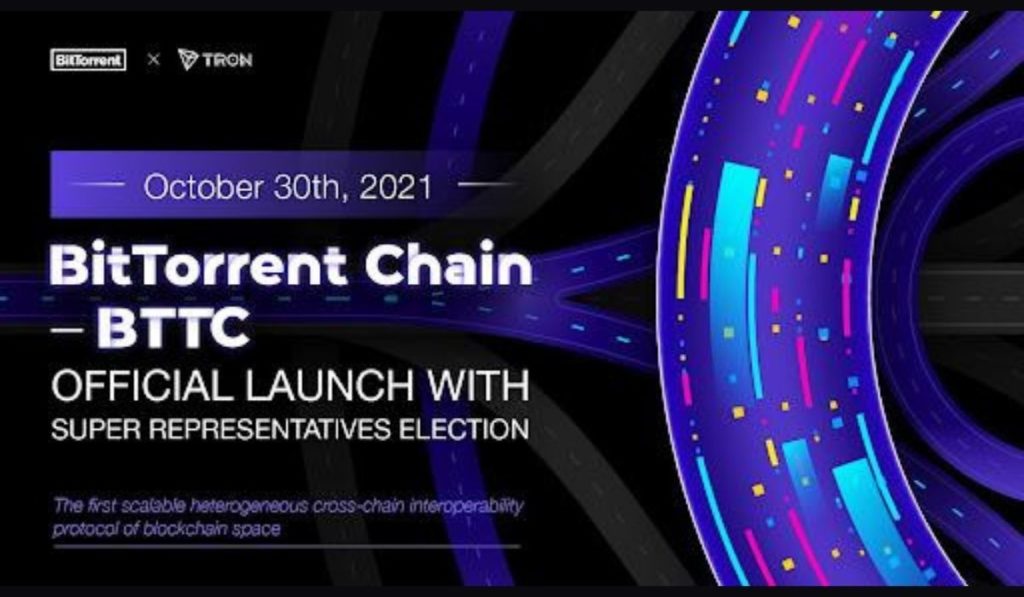 BitTorrent, a decentralized peer-to-peer network, and TRON, blockchain-based operating systems are thrilled to announce the official launch of their BitTorrent Chain (BTTC).

As per the announcement, TRON and BitTorrent have worked together for their first-ever venture into the cross-chain field. BTTC, launched on October 30, is the first heterogeneous cross-chain interoperability protocol. The protocol has been built on the TRON blockchain, co-developed by the two projects.

TRON and BitTorrent came together to co-develop this project due to the lack of a system in the current blockchain ecosystem to support the demand for large-scale applications. While decentralized applications are being developed in large numbers, users still face poor user experience, high transaction fees, low scalability, and slow block validation.

To solve these problems, BTTC adopts a proof of stake (PoS) consensus mechanism that deploys multiple nodes for validation and leverages side chains to scale smart contracts. Upon its release, the protocol is also compatible with EVM and will support TRON, Binance Smart Chain (BSC), and Ethereum. Note this will make BTTC the ideal space for users to transfer mainstream assets in a decentralized manner free from restrictions.

The node validators, the BTTC Super Representative application, will allow the protocol to tap into a talent for community management and further enhance its ecosystem. This will notably allow for the recruitment of quality Super Representatives from the global communities.

The BitTorrent-Chain is designed to achieve faster block confirmation times through a PoS mechanism in the Validator layer in addition to the block producer-based mechanism. BTTC also uses checkpoints and burning proof mechanisms to achieve final validation on the main chain enabling high-speed asset transfers across chains.

BitTorrent Chain (BTTC) seeks to create a healthy ecosystem for TRON that will benefit all users across the globe, welcoming the participation of outstanding institutions and projects. This is why users can join the BitTorrent Chain (BTTC) Super Representatives elections that will be held synchronically on TRON. Everyone is welcome to make their applications to join. However, participants who successfully apply will receive an official notice to participate in the BTTC Super Representative.

Notably, the elections will entail participants, BTTC holders voting by staking. Those who wish to participate should do so as quickly as possible since the project plans to close the election channel once the Super Representative quota and BTT staking volume reach the upper limit.  The project will soon release the specific election and reward rules for those seeking to join the event.