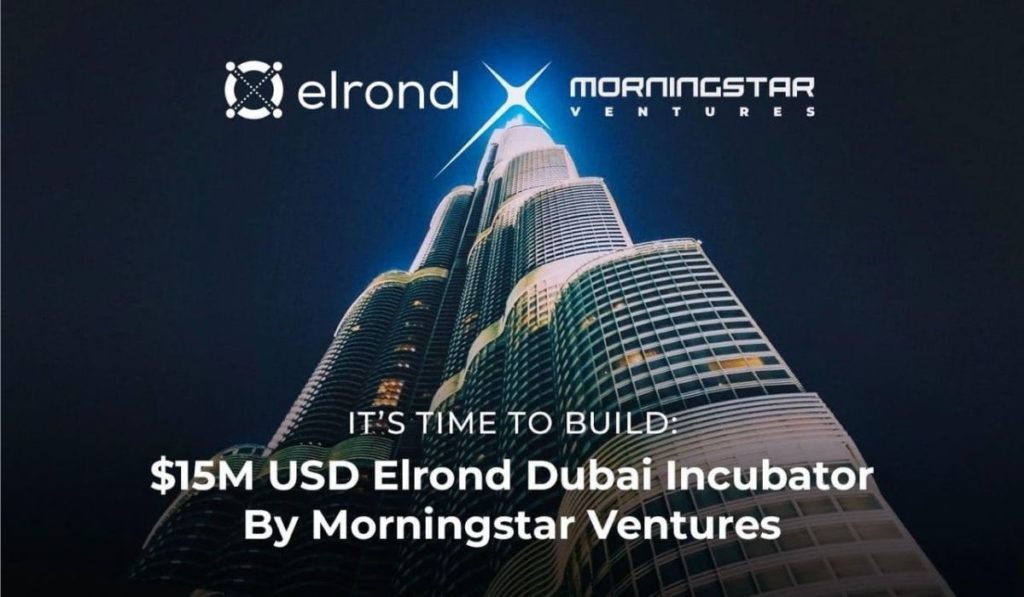 Morningstar Ventures, an investment firm that focuses on digital assets and blockchain technology-based in Dubai, has announced a $15 million investment fund in Elrond blockchain. According to the firm, the investment will fund global teams building on Elrond through investments and grants.

Further, Morningstar Ventures will set up an Elrond Incubator based in Dubai. Consequently, the Elrond blockchain will have an opportunity to further grow in the Middle East through the UAE.

“It has been incredible to observe how the unique combination of vision, talent, and execution capabilities enabled Elrond to outperform much bigger and way better-funded teams.”

“Their rapidly evolving internet-scale blockchain technology is perhaps the most advanced in the space, which creates an asymmetric opportunity for Elrond to rapidly catch up with — and perhaps even surpass — the biggest blockchain ecosystems. We’re thrilled to take this opportunity and build alongside the hardest working team and most engaged community” said Danilo S. Carlucci, Morningstar Ventures Co-Founder, and Chief Investment Officer.

Notably, the first project expected to receive strategic backing from Morningstar is Holoride.

Holoride is an Audi-backed extended reality media platform running on the Elrond blockchain.

“The explosive growth of the Elrond ecosystem happened with an unstoppable team building internet-scale technology and an amazing community supporting them. Now, major players such as Morningstar Ventures are making significant long-term commitments aimed at the rapid adoption of our tech,” said Beniamin Mincu, Elrond Network CEO. “This signals the start of the next explosive growth phase for the Elrond ecosystem, where driven builders will leverage powerful devkits to  innovate at the forefront of the blockchain Supercycle.”

Elrond Network takes pride in being an internet-scale blockchain ecosystem capable of processing 15,000 transactions per second. Additionally, the Elrond ecosystem is capable of scaling over up to 100,000 transactions per second should the demand arise. Notably, the Elrond blockchain network takes advantage of sharding technology.

Besides being an eco-friendly blockchain network, Elrond takes pride in over 3200 validators which are spread all over the world. The Elrond uses the EGLD token as the native coin to enable staking, governance, and validator rewards on the ecosystem.

According to market analytics provided by Binance-backed Coinmarketcap, the EGLD tokens traded around $241.08 at the time of reporting. Ranked position 38 by market capitalization, the asset has a market cap of approximately $4.7 billion.