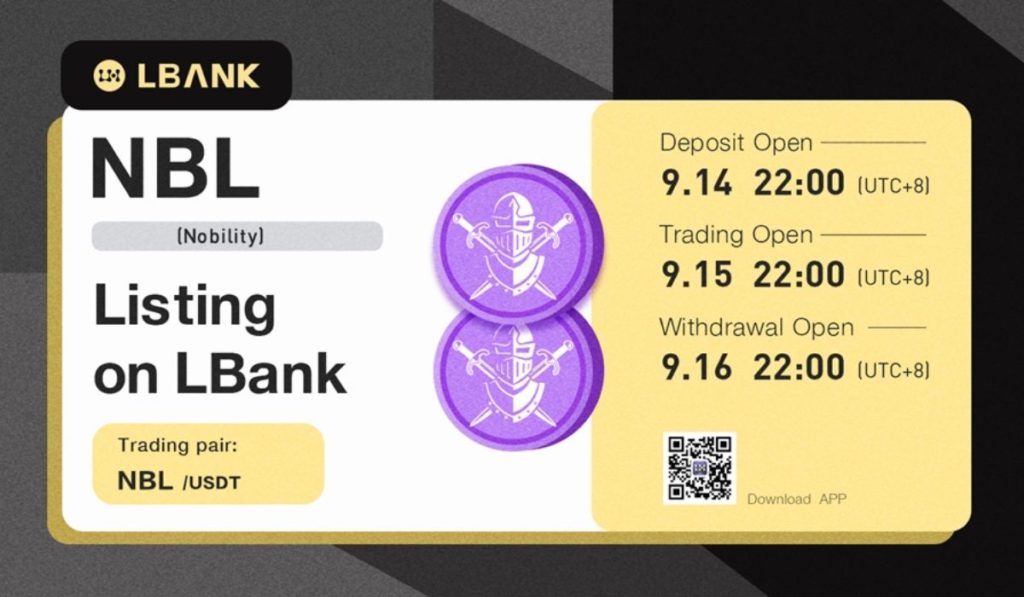 As per the announcement, the NBL/USDT trading pair will be officially available for trading at 22.00 UTC+8 on September 15, 2021. NBL joins over 290 coins listed on the exchange. Notably, through this listing, the NBL token will reach a wider audience of investors across the globe. In addition, the listing will further push Nobility’s mission within the esports industry.

Nobility is an esports platform and utility token on the Binance Smart Chain (BSC). Nobility aims to solve the problems involving the current limitations of the esports gaming industry. It hopes to do so by innovating blockchain technology and the advantages of decentralized finance in the industry.

The platform is best known for providing and organizing tournaments with large prize pools. The platform also offers content creators an opportunity to earn more from playing their favorite games.

The Nobility project has a total supply of 100 billion NBL tokens. The project will have an initial burn of 40.3% of the total supply in the next year.

Generally, the platform charges an 11% fee on all transactions. From this, Nobility uses 7% is redistributed by weight to qualifying holders in BUSD and not its native token. The remaining 4% is divided into two equal parts. The first half is added to the liquidity pool for increased market stability, while the remaining half is allocated for, but not limited to, marketing, business development, charity donations, scholarship funding, community events, manual burns, Esports tournament prize pools, and giveaways.

To celebrate the listing, LBank will be planning a giveaway for participants of its one Voice AMA with Kyle McDougal, the Nobility token’s CEO. During this session, LBank plans to share 2,480,080 $NBL to 100 lucky winners. The AMA session will present an opportunity for users to ask anything they need to know about the project.